Here are a couple of websites I have launched so far.

I have been working with Suzanne for quite a few years and it is always a pleasure when clients return to me again and again for work. This latest project is a redesigned project for her Chicago based interior design business.

Her website https://www.suzannefalkinteriordesign.com was built on the Squarespace platform

Toni is another repeat customer and has recently started a new business venture in tarot card reading and energy clearing. She wanted a website where her clients could book and pay form appointments online.

I created a calming but engaging look and feel and integrated full e commerce with appointment capabilities on the backend. New appointments are sent straight to her Google calendar.

We have been working with Lincolnshire academy of dance for 10 years and last week had the pleasure of launching a new and improved website that coincided with the start of their 23rd season .

The site is clean and totally responsive.

We put ourselves in the shoes of the parents and students using the website when thinking how to best organize the content, and came up with a tabbed system of presenting much of the information. This reduced bloat and scrolling of individual pages but pertinent information is easily and intuitively available.

For example all the dance classes have tabbed information on the dress code.

We are receiving many compliments on the website- thank you for everything!

In the midst of the Covid 19 pandemic many businesses are facing unprecedented challenges, supply chains are messed up and the demand for particular products are through the roof.

Take face masks, the demand for these is immense.

Being able to tap into their well established relationships with face mask manufacturers, Avocado Medical Supply contacted us last week looking to create a website for their Face Mask distribution services.

Time was of the essence but their new website was launched this morning.

They have plenty in stock!

As a hobby I have really got into surface pattern design over the last year or so and in that time have built up a substantial set of collections.

Surface pattern design is the creation of artwork ( generally repeating patterns) that can be applied to everything from fabric to phone cases, gift wrap to bathmats.

I use all sorts of techniques to produce my designs, creating repeat patterns from watercolor paintings, digitally using Adobe Photoshop and Illustrator and even on my ipad with an ipencil using a great app called Procreate.

To showcase my pattern collections I have just launched a new website ZoeFeast.com. I kept the design clean and simple and let the patterns be the star of the show. The website is fully responsive.

Take a look at ZoeFeast.com

We have been working with OperationHEATJAC, manufacturer of a unique heated garment for use in the O.R, for some years now. In that time they have extended their product offering to different markets. These changes have meant a slight restructuring of the business, which now operates under the name of HEATJAC with three divisions, OperationHEATJAC, HEATJAC for Motorsports and HEATJAC for Outdoors.

Time for a branding refresh!

We kicked off by tweaking the original company logo whose original design worked equally as well in a shortened version.

The website was also refreshed to better reflect the three division with an updated home page, new navigation and dedicated division shopping pages. The site was also moved to a different domain heatjac.com

I have said it before but I will say it again, web redesign projects are so satisfying. It’s something about breathing new life into the old and worn, giving it shape, presence and function to do battle in today’s business environment.

I have been working with Heartstation, providers of AED cabinets, for some time now and was delighted when they hired me to revamp their website which dated back to 2006! The internet technology available since that time has come a long way.

The redesigned site encompasses a bright,open look and feel with call to actions throughout. It offers a completely responsive experience for the user whether they are visiting from their mobile or a desktop.

and here is a little reminder of their previous site

Creating an effective brand image for your small business can “up your game” and let you compete with the bigger players in whatever arena you operate.

Are your customers having the same experience however they interact with you, or are they faced with mixed messages a mishmash of graphics and just general confusion?

We have just completed a project for a Chicago based small business, Every Day Feels Great, who came to us looking to create a brand for their wellness business.

The project started with brainstorming a tag line which summed up what they want for their clients. Once the was established we worked it into a very simple text logo.

We then went on to design a business card, a simple one page website and graphics for Facebook.

Nothing says a happy customer than one who sends me referrals and this was how I ended up working with Lamira Martin, a referral from a fellow celebrant Ruth Hasser

Lamira was looking to redesign the website for her Celebrant business, Your Ceremony, Your Way . It needed a fresh look and offer her visitors a better experience when accessing the site from a mobile device.

Redesign projects are always so satisfying, here is what the original site looked like.

And here is the new site

Zoe is an amazing website creator.
She listens – From my rambling, she was able to discern a theme, colors, font and images that resonated with my vision for my website.
She is patient – After the initial site was created, Zoe was open to any and all changes that I wanted.
She is kind – I never felt like the inexperienced techie that I am.
She is knowledgeable – Her recommendations, especially re: accepting payment and optimal search avenues were spot-on.
I highly recommend ZOE FEAST, website creator EXTRAORDINAIRE!!

Thanks Lamira for such a positive review, you were a pleasure to work with!

The last few weeks I have been working on a new website for a A-Yo Kitchen, a York PA recipe developer and food photographer. This startup business is the brain child of Alysha Yoder, who has such talent when it comes to preparing, styling and photographing food. I was literally slobbering as each photograph got uploaded to my dropbox.

Alysha wanted a very minimalist look to her web site, where her photographs have the staring role. She had actually picked out a WordPress template before we connected and had dabbled with it on WordPress.com. However as with a lot of templates and the limitations faced when running a website though WordPress.com, she was unable to make it do exactly she wanted to achieve her vision. It needed the magic touch from a professional web designer!

The first thing I did was to get it off WordPress.com and set it up as a self hosted site. If you need multiple plugins and are after a particular functionality it is actually more cost effective to take this route. 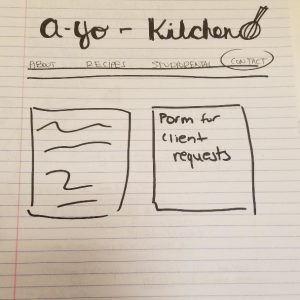 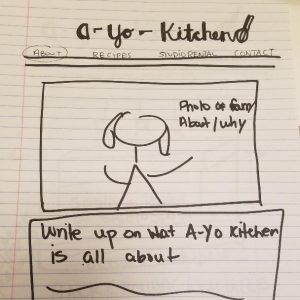 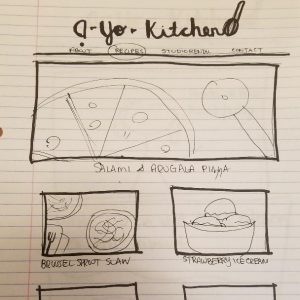 I brought the site to life. It is actually really useful when a client can provide sketches as it really helps clarify exactly what they are after. 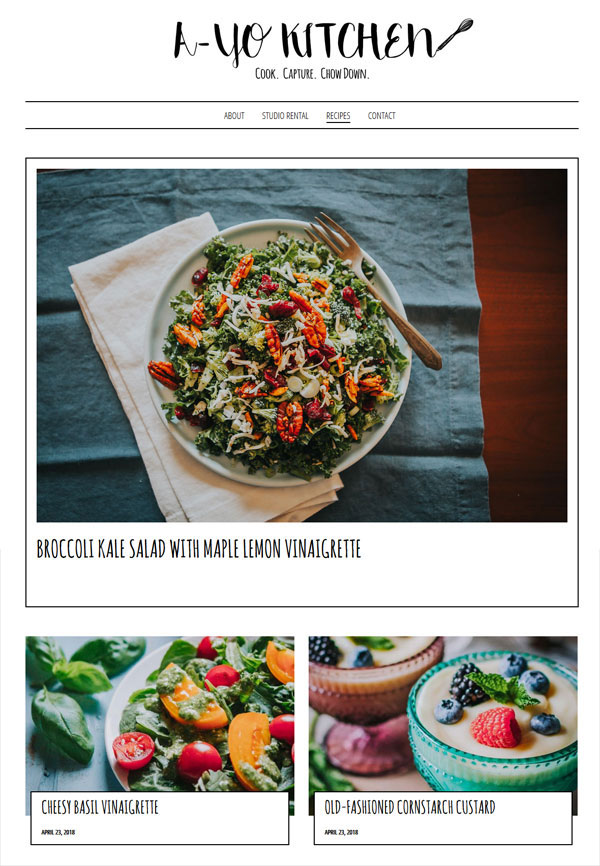 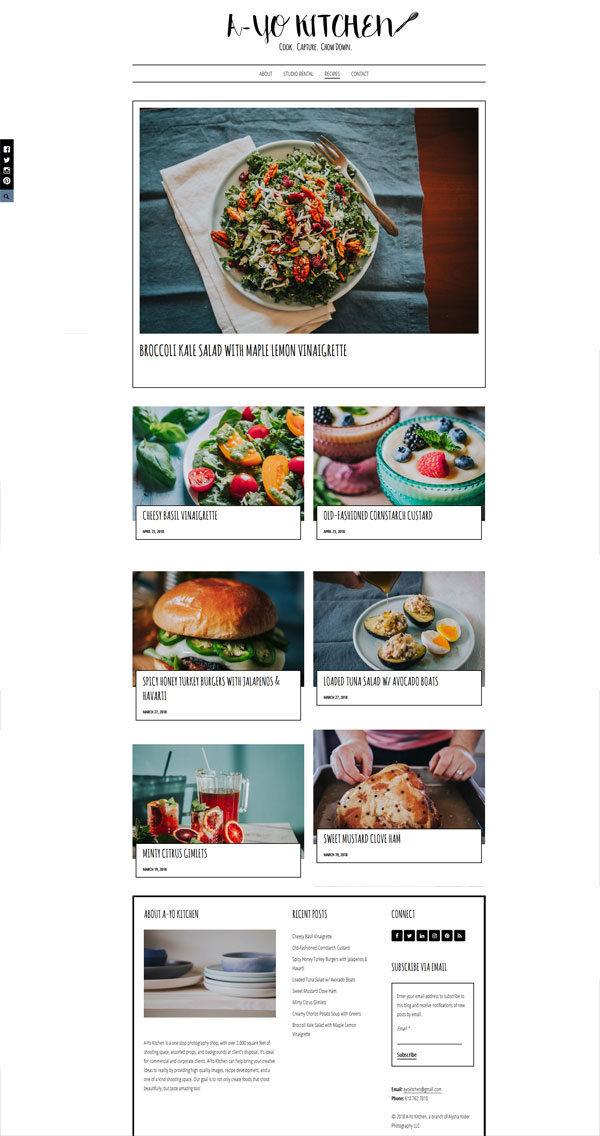 Take a look at it at ayokitchen.com, it will have you slobbering too!

I have been working on a really interesting project over the last few weeks, the branding and marketing of a portable solar generator.

The project involved coming up with a name for their product, developing a brand image and a website.

Understanding the target audience and the unique attributes of the product were key parameters during the research of the name.

It was also important that a suitable domain name was available…no easy feat in this day and age where so many domain names are purchased and squat on. Product naming is fascinating and after a considerable groundwork I presented a list of possibilities to the client.

The one they selected was HELIOPACK Solar Generator.  Helio originates from the Greek word for the sun – Helios, and pack has connotations of something that is portable and is outdoorsy. I think it fits the product perfectly!

The outdoorsy rugged look was also conveyed with the logo. A strong font was selected for the word HELIOPACK and a “power up” symbol incorporated with in it. The color choices reflect clean energy. 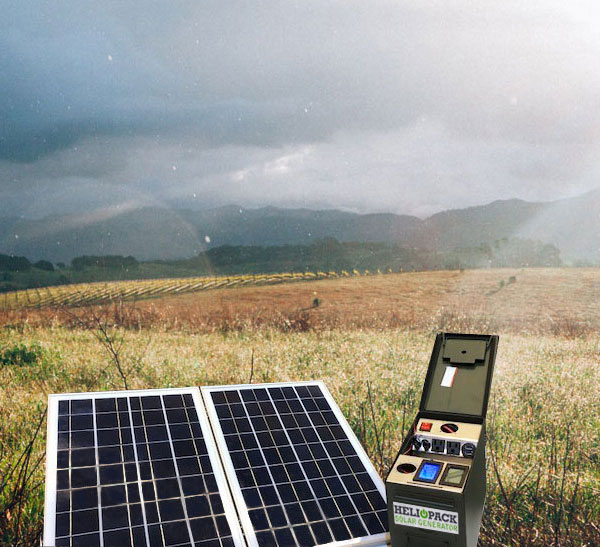 The website was kept simple and bold and there are future plans to add e-commerce. Check it out at HELIOPACKgenerator.com 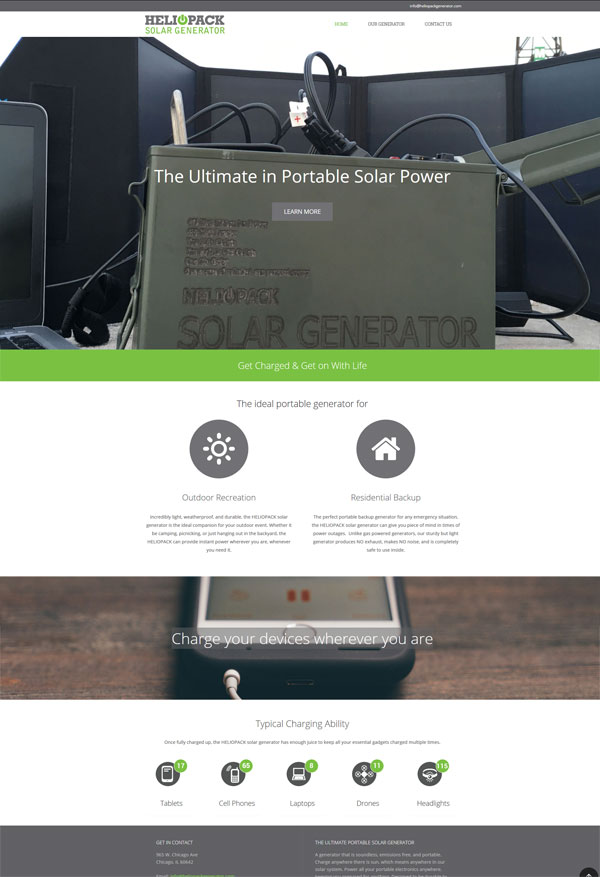